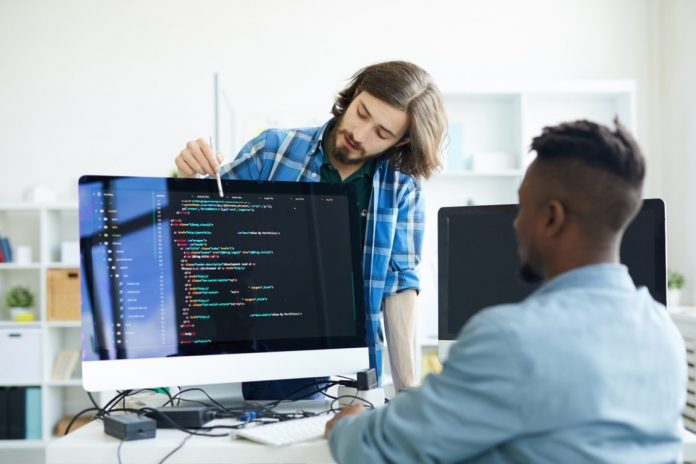 Functional programming (FP) has been around for the past six decades, and at the moment, attempts to overcome the ubiquitous dominance of object-oriented programming (OOP) continue. With the growth of popularity for machine learning (ML) and big data analysis, FP has gained demand due to the ease with which pure functions can be implemented. The functional paradigm also makes it easier to track, test, and maintain code for complicated assets, like data analysis, setting the stage for active use in the near future.

So, where does the interest in functional programming come from, and why is it worth learning FP languages? Let’s figure it out.

In the IT world, nothing happens just like that. One thing clings to another, and now all the hottest trends are interconnected.

If we recall the most sensational trends of 2010th, these, of course, will be AI, IoT, Big Data, and Blockchain. They are on everyone’s lips, and everyone knows their potential and key features. And it is some of these trends that have catalyzed the rise in popularity of functional programming among developers.

Currently, the problem of parallel processing and work with large data streams is very acute, and one such example is the work with Big Data. And by parallelizing the processing of this data, you can get the desired result in a split second, which is critical in the real world. Plus, do not forget about decentralized (distributed) computing, blockchain, and others, which, in their essence, are a rather complex mechanism. And for such calculations, FP is most suitable due to the principles of functional programming (such as pure functions, for example). The use of FP techniques facilitates parallel code execution and maintenance. From which we can safely conclude: large IT companies tend to use functional programming more and more.

The web interfaces (frontend) of almost all sites were written in JavaScript. However, not everyone loves it, and there are almost no alternatives. Because of this situation, the developers have two options:

And it’s the time when TypeScript came to the stage.

TypeScript is a programming language that fixes many of JavaScript’s shortcomings. TypeScript code looks almost the same as JS code, and if you have experience with website development, learning TypeScript would be easy enough. Especially considering that you can compile TS into executed JS code via TypeScript compiler.

The major advantage of introducing TypeScript is its strong typing. Typed variables help avoid bugs in code on the go, as the compiler monitors the correctness of all the implemented variable types, their consistency, and inheritance. Check this post if need more details about TS benefits.

Clojure, Elixir, Erlang, Elm, F #, Idris, Nix, Agda, and Haskell are the languages most often mentioned as the family of functional programming. And they will not lose their popularity for many years to come. Haskell is the most powerful language, my favourite one, but over time, later ones, such as Clojure, became intertwined with it, forming a general picture of the evolution of FP.

Let’s look at a few most popular and progressive functional programming languages.

Haskell is an unusual language from the point of view of those accustomed to Java, C ++, Python, or any other object-oriented language. The point is that Haskell is a functional language.

Haskell is too complicated for ordinary things, and you don’t need it for a simple website. It will be like reinventing the wheel. But great for making the server part, which will take over all the complex calculations, or decentralized layers for transactions, covering hundreds of thousands of operations. Haskell is best at accurate math and logic, so the better you know math, the easy will be for you to code in Haskell.

Almost everything in Haskell is done through functions. The task of the programmer is to find the mathematical function, which will be the solution for the task, and to describe the function to the compiler, mentioning:

Haskell is a language that supports lazy evaluation. This means that he will calculate the required values ​​in any function, not when the programmer runs it, but when this value is really needed in the calculation.

For example, we have a function that returns some value after being called. Haskell will not read if this value is not needed right now or is not used in a function call. It will wait until the function value is required, and only then will calculate it.

Lazy evaluation helps reduce the load on resources and makes programs faster and more efficient. If you write a calculator that does all the math but only uses addition, Haskell won’t even pay attention to the rest. He will know that you have a code that, if anything, can still multiply and divide, but he will not do anything with it yet.

What is Haskell good for?

It is a dynamic functional language designed for building scalable and maintainable applications. Elixir is powered by the Erlang VM ecosystem. It is used by Heroku, WhatsApp, Klarna, and other projects for distributed, fault-tolerant applications. Every element of applications is an expression, Erlang functions can be called without impacting runtime due to compilation of bytecode in Erlang and vice versa.

Elixir was released in 2012 by José Valim and was supported for several years only by its creator. At some point, its popularity grew so much that many companies began to use it in their projects seriously.

Elixir runs on top of the Erlang virtual machine. It is widely recognized for its unique capabilities for building fault-tolerant and distributed systems. Moreover, both in embedded devices, such as routers, when creating real-time applications (games, instant messengers).

Almost everything that is said about the Elixir is the merit of the Erlang virtual machine. Elixir was conceived as a language that brings something new to the world of Erlang, which Erlang itself lacked. First of all, these are tools that increase the level of abstraction (Struct, Protocol), allowing you to write more concise code (pipe operator, with construction), and it is convenient to manage the project and its dependencies (mix). It is also meta-programming, a powerful macro system that allows you to create DSL languages. A prominent example of such a DSL is the Ecto database library.

Elixir is a functional language. It is easy to learn and efficient to use. Based on it, the Phoenix web framework was created, which is very reminiscent of the simplified Ruby on Rails. It’s an open-source language and is available on GitHub.

In addition, I wish to say that learning FP languages ​​changes your perception of programming in general, helps you look at problems from a new angle, forms abstract thinking, and lets you find non-standard and effective solutions to problems. If you are searching for the job of your life, functional programming can be such one.

Digital Marketing Strategies: Tactics You Should Have In Mind For Your Business

2 reasons you should embrace cloud computing

Taelyn Finch - January 19, 2022 0
To use digital marketing which can be done by sites like comradeweb.com amongst others and get the expected results, it is essential to have...

2 reasons you should embrace cloud computing

What to Do When an Internet Outage Occurs?